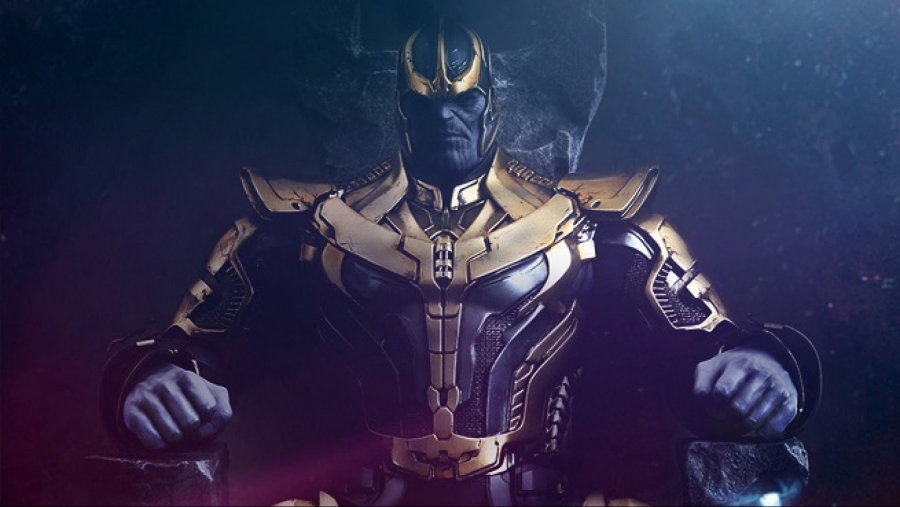 Hi everyone, I’m back! It’s been way too long since I posted but it feels good to write again. I had to take a break because I got a new job in publishing and I needed to settle in. During my time away, however, I have seen plenty of movies and had some very interesting things happen to me. I can’t wait for you guys to read about them! So, without further ado, let’s get it.

I hope all of you have seen Avengers: Infinity War by now but if you haven’t, this is your final SPOILER WARNING. Like everyone else, I have been waiting 10 years for the culmination of the Marvel universe. I’ve seen every Marvel movie up to this point so to say I was excited is an understatement. The only reservation I had was I honestly didn’t know what to expect with this movie. The Last Jedi messed me up so immensely that I feared Infinity War would do the same. I’m here to tell you it didn’t, but maybe it did?

Let’s start with what I loved about Infinity War. Thanos is unrivaled when it comes to Marvel villains. Until Thanos finally appeared on the big screen, Kilmonger from Black Panther was my favorite villain (lasting a whopping five months) but Thanos is everything that Kilmonger was, just on a much larger scale. The movie opens with a badass scene that tells the audience Thanos is by far the most ruthless villain the Marvel Universe has ever seen. Within the first 15 minutes of the film, Thanos literally chokes Loki to death in front of Thor. He kills one of the primary villains of the previous movies, and a villain in Loki that had “conquered” death before. You immediately feel the gravity of the situation which makes the rest of the movie that much more powerful. On top of that, Thanos truly thinks he is doing the right thing which always makes for a compelling villain.  Aside from the brilliance of Josh Brolin as Thanos, Infinity War had all the humor we have come to expect from Marvel. This movie was, at times, can’t breath I’m laughing to hard, funny. I almost died choking on popcorn when Drax was standing in the corner and he said “1-hour”. All the interactions between Thor and Peter Quill, as well as with Iron Man and Peter, were hilarious. Another reason I really enjoyed this movie was the dynamic between Gamora and Thanos. I 100% felt the emotion and conflict that surrounded their relationship. They both loved each other even though they had different views on right and wrong. Thanos was never the best father to Gamora but he was still her father and she was still his daughter. The clear struggle in Thanos when he had to decide to sacrifice Gamora or end his life long goal was as heartbreaking as Gamora realizing he was going to pick the latter. I personally love when there is this amount of emotion in a Marvel movie. Although there were many things to love about Infinity War, I felt it fell short of being amazing due to one big negative, the finality of it all.

I want to first say that I think it took some major cojones to end Infinity War the way they did. I actually loved it. It was a perfect way to end the movie, one that everyone prior to watching it thought they wouldn’t dare do. This movie was not an Avengers movie, it was a Thanos origin movie. He was the main character and he was the one who won in the end. Thanos snapped his fingers and hero after hero dissolved away (Spiderman though, oh God). My only problem was the fact that the original Avengers all survived and only the new Avengers died. If the originals had died along with others, then their stories would have ended and the finality of their deaths would have been truly universe altering. When someone is killed in Game of Thrones, unless it’s Jon Snow, you really feel their death is final and the impact is greatly felt. The fact that the new avengers died, many with only one movie to their names, means the ends of their stories are not final at all. Marvel has already announced future movies with the heroes that perished at the end of Infinity War. We know that they will be brought back in some way which taints their deaths. There’s no world where Marvel and Disney will risk billions by not having another Black Panther movie, for example. This is the main reason I can’t say I absolutely loved Infinity War. I left the theater thinking that was insanity but how long will they actually stay dead? I guess that’s just how the world is now though. Imagine if this movie was filmed in the 80’s with no social media. The making of the other movies and who is in them would not be known and the finality of these deaths would be felt far greater than in today’s social media world.

All in all, I thought Avengers: Infinity War was a great movie but it fell slightly short of the massive 10 year build up. I have it in the top five Marvel movies of all time and I would love to see it again. However, the pending reversal of the events knock it down a peg. I give it a 4.5 out of 5 Jeff Goldblums! Till next time normal dudes. 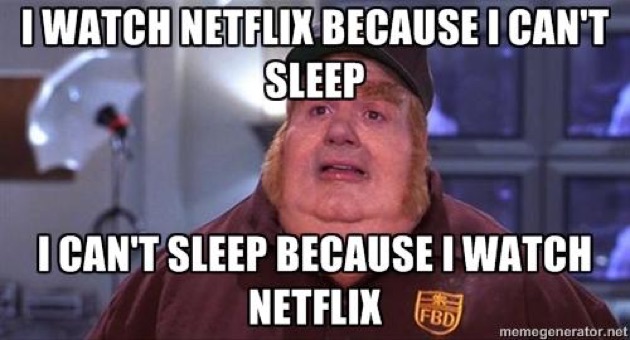 I’m pretty sure Netflix is slowly ruining my life. I started suspecting this a couple months ago when I realized that I wasn’t watching television anymore. All the shows I was watching were starting to pile up on the DVR because I was insanely behind on them. Ever since I got a Firestick (allows my not smart TV to become a smart TV) the only thing I do is watch Netflix. I never change the TV to actual television. There’s just too many shows on Netflix to ever possibly get bored. I’ve watched both Parks and Rec and The Office twice all the way through. After finishing Stranger Things (which was amazing) I have moved onto The Last Kingdom and The Punisher, only waiting mere hours before starting them. Netflix is ruining my life because it’s starting to take precedence over other things. Do I want to go to the gym or watch Tropic Thunder? The gym can wait, that movie is hilarious (Tom Cruise for God’s sake). I’ve got to go to the bathroom? We don’t pause in this house, have to wait another hour. Go out with my friends? Nope, Netflix is my greatest friend. You get the picture, I watch too much Netflix. I mean, sometimes after work, the most conversation I have is when Netflix asks me if I’m still watching and I respond with “don’t judge me” while pressing yes (always yes). It’s even starting to mess with my reading. I started A Song of Fire and Ice (the Game of Thrones books) like 3 months ago but I’m not even passed book one yet because of stupid Netflix. At this point, I watch movies on there that I actually own in Blue-Ray just because I have the power (so much power) to do so and they are downstairs which is rough due to the fact that I don’t gym anymore. I think I have to go all Punisher and hit my Firestick with a hammer. Maybe I’ll finally be free from this prison that is my bed after that. Until then though, I have 12 more episodes of the Punisher left I can’t wait to watch them!

The third Thor movie, Thor: Ragnarok, hit theaters this weekend. I was lucky enough to avoid all the crazy lines on Friday night to watch it for you guys and let you know if it’s worth watching. Wasting no time at all, yes. A million times yes. I loved this movie and I think I love it more and more each day I go without it. Thor: Ragnarok was directed by Taika Waititi and stars Chris Hemsworth as Thor. I’ve heard from some people that the beginning of the movie threw them off a bit, this is due to Taika Waititi completely reinventing Thor. The first two Thor movies were more Game Of Thrones like than Deadpool like. They were pretty serious movies with spots of humor here and there. Thor was still awesome in those movies but his personality was a little dull. He was kind of above everything and everyone. That old Thor was thrown out the window though. Chris Hemsworth was hilarious in this movie. Like I said before, it took a little time to adjust to the new Thor but once you do it’s full steam ahead from there. Not only was he funny but he also kicked ass like never before, often to Led Zeppelin (everything is better when Led Zeppelin is played to it). The greatest thing about the new, lighter, Thor was the opportunity to let everyone in the movie shine comedically. Tessa Thompson was great as Valkyrie, and Tom Hiddleston was perfect again as Loki. Jeff Goldblum was fantastic as the Grand Master. Every time he was on screen I was laughing. He was so eccentric and just so Jeff Goldblum, if that makes sense. Similarly to the way they change Thor for this one, they changed Hulk for the better as well. The Hulk, played by Mark Ruffalo, actually has more than 1 line and his banter with Thor provided some of the funniest scenes in the movie. Although everyone in the movie was hilarious, one character stole the show for me. Korg, played by Taiki Waititi himself, killed me. I couldn’t control myself whenever he said something. It wasn’t normal laughing either, it was one of those silent, mouth open, rocking back and forth, ugly laughs and I don’t know why it just happened. I wanted to talk about some of the jokes because I crack up just thinking of them, however, I absolutely hate spoilers so you will have to watch it yourself to ugly laugh like me. This movie had every thing I could have wanted in a Marvel movie. It was hilarious and kick-ass from start to finish, even featuring a formidable villain played by Cate Blanchett. From the characters, to the setting, and the overall vibe, Thor: Ragnarok is one of my favorite Marvel movies of all time.  I cant wait to see it again and for you guys to check it out too. I’m going to give it a 5 out of 5 Jeff Goldblums!